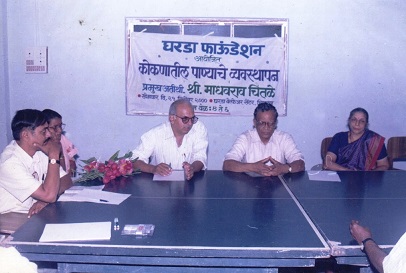 India receives its water only during the Monsoon - the months from June to October that bring rain to the subcontinent. For the remainder of the year one must rely on water stores or on bore wells that tap the underground aquifers. Despite an annual central budget in the hundreds of millions of rupees, most villagers do not have access to drinking water leave alone agricultural water. It is not uncommon for a woman, for the gathering of water is the traditional job of women, to walk for an hour in each direction for every pot of water which must then be used for drinking,cooking, washing and watering the livestock. It is easy to see why access to water is the burning need of rural folk.

Providing access to water is a major priority for the Gharda Foundation, yet this is our most costly endeavor consuming over half of our budget. We can only undertake a few projects at a time and are forced to make difficult choices.

As part of our effort we have worked with villagers (who provide donated labour) to clean and desilt the traditional village talab(pond) which provides the only storage facility for agricultural water. To date two village ponds have been deepened and repaired - one of 207 kms. and the other of approx. 150 kms. The delayed monsoon this year(1999) adversely affected crops in the entire district but our farmers were able to not only save their crops but produced Bumper yields due to this joint effort.

In conjunction with the state govt. of Maharashtra the foundation was able to oversee implementation of a large drinking water scheme which has provided drinking water to the villagers of Kadavali, Kumbhavali and Dalwatne.

Our most ambitious( and expensive) schemes involve Lift Irrigation- the process of lifting water from a year round source using pumps and either storing or directly utilizing the water. In the hilly Ratnagiri area of Maharashtra where village hamlets are often located on mountain tops and practice terrace farming , this is often our only option. To date lift irrigation projects have provided water to the villager's of Dhamni and we are currently implementing a similar project in Dalwatne.

We are also concerned about the conservation and optimal utilization of available water. With this aim, we have introduced drip irrigation and ferrigation on demonstration plots donated by villagers to educate villagers and help them realize that there are alternatives to seasonal cultivation.

The village of Bharan's pond of 207 acres was deepened at most essential sides and the inlet-outlet repaired. It now irrigates 250 acres of a second crop of wheat. In addition to this two small talabs were created with the participation of villagers and this will meet the emergency requirements for irrigation this year.

The villagers of Dhamni are participants and the beneficiaries of lift irrigation projects which have not only provided drinking water but have also allowed for a second crop for the very first time in the history of the village.

We are in the process of working with the Maharashtra govt. to build two small dams on a small tributary river- the Vashishti. Once completed these will irrigate over 100 acres of Kadavali's villages land. 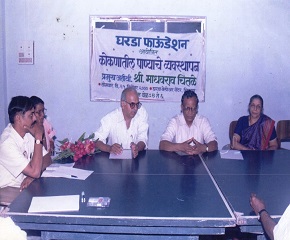 Have a question or know more?